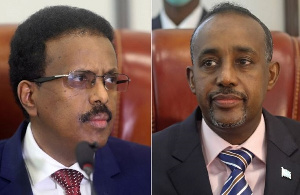 US announces sanctions for Somali officials after election delays

The United States government has announced visa restrictions to Somali officials and individuals, accusing them of “undermining the democratic process in Somalia”, after yet another delay in the parliamentary elections.

In a statement issued by the US Department of State on Friday, Secretary of State Antony Blinken said the sanctions were “to promote accountability for their obstructionist actions.”

The restrictions were announced just hours after Somali leaders extended parliamentary elections to March 15 after failing to complete them on February 25.

The elections, which began last November were supposed to be held a year ago but have been halted by a series of delays including lack of agreement on how they would be conducted and infighting between the president and prime minister.

So far, 179 of the 275 members of the lower house have been selected through a complex process of indirect voting by clan delegates. These lawmakers will in turn choose the president, but the date for the presidential election has not been set yet.

A long-running rift between the federal government and regional state leaders has raised the stakes in Somalia, which has faced political instability since the 1991 overthrow of military ruler Mohamed Siad Barre, the country’s third president.

Armed group al-Shabab, which is fighting to topple the central government has also intensified attacks in key regions where elections are taking place, worsening the situation.

According to the UN, about 4.3 million people are affected who are affected by the drought are in need of humanitarian assistance. Earlier this week, the International Monetary Fund warned that it could stop funding to Somalia if elections are not completed in time.

However, the new deadline is unlikely to be met unless underlying political disagreements among Somali leaders are resolved. As part of a September 17 agreement, Somalia’s five federal member states are to conduct elections in two cities in their territory but the southern Jubaland state has accused the central government of interfering in its territory.

The impasse is likely to continue until the political rift between Mogadishu and the region is settled.

Tags after ANNOUNCES Delay’s ELECTION FOR OFFICIALS sanctions Somali US

Previous VIDEO&PHOTOS: Sad scenes as Guan DCE who died after 11 days in office is buried
Next Qnet agent commits suicide