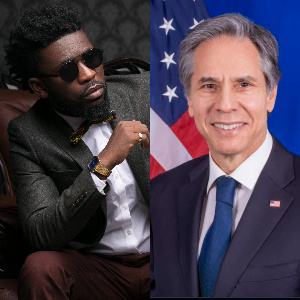 US Secretary of State reveals he loves Bisa Kdei’s songs

Anthony Blinken tweets his top 10 songs for the year

Bisa Kdei’s song, ‘Yard,’ has won the heart of United States Secretary of State, Anthony Blinken, and he has gone ahead to list it as part of his top 10 songs of the year.

In his social media post, he mentioned that music goes beyond borders as it works to bring people together.

“Music brings people together–it transcends borders and everything else that might otherwise divide us. As we close 2021, I’m sharing some of my favourite songs released this year (or recently), by artists around the world. Hope you enjoy as much as I have,” his tweet read.

Ronald Kwaku Dei Appiah, better known by his stage name, Bisa Kdei, has always thrilled fans with some of his hit songs and is known for delivering mid-tempo tunes that always bring out the best in him.