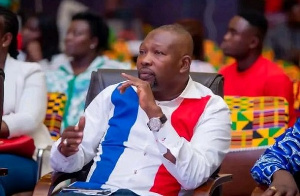 Victory for Hearts, defeat for Kotoko: Performance of football elements in NPP elections

The New Patriotic Party(NPP) went to the polls on Saturday, July 16, 2022, to elect a new set of national executives ahead of the 2024 general election.

In the elections that came off at the Accra Sports Stadium, while Twum lost by a bigger margin, Futa earned a convincing win.

Eric Amoako Twum is the commercial manager of Asante Kotoko. The Nana Yaw Amponsah-led management team appointed him in 2021.

Former Hearts of Oak management member, Aziz Haruna Futa was re-elected as the Nasara Coordinator of the NPP.

During the 2021 Africa Cup of Nations, he was part of the Black Stars delegation who travelled with the team to Cameroon.