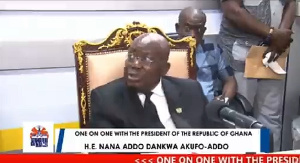 It appeared shocking to Information Minister Kojo Oppong-Nkrumah, the words of his boss, President Nana Addo Dankwa Akufo-Addo, on issues regarding the deportation of galamsey kingpin Aisha Huang.

President Akufo-Addo, while speaking in an interview with Stone City Radio in Ho during his tour of the Volta Region, expressed uncertainty about the deportation of Aisha Huang in 2018.

This follows suggestions by some of his appointees and former appointees, including Senior Minister Yaw Osafo Maafo, that Aisha Huang was deported from Ghana after being arrested for her involvement in illegal mining activities.

“…I am not still sure whether she was, in fact, deported or whether she fled the country the first time and has now come back or whatever. There still seems to be some uncertainty about it,” he said quite to the utter shock of the Information Minister, who raised his head abruptly following the president’s words.

Before this, Kojo Oppong-Nkrumah appeared to have bowed his head, seemingly on his phone.

After this, he went back to his activities on his phone while the president continued his submission in the interview.

“Whichever way it is, she has become a sort of nickname for all that the ‘galamsey’ represents and also, unfortunately, for the involvement of Chinese nationals in this illicit trade,” the president continued.

It will be recalled that Aisha Huang gained notoriety as an illegal mining kingpin in 2017. She was arrested for the same conduct but later deported, with the state discontinuing the trial against her.

Justifying why the state had to deport the Chinese national, the Senior Minister, Nana Yaw Osafo-Maafo, addressing some concerns of Ghanaians in the diaspora at a town hall meeting on April 18, 2019, revealed that, “Putting that woman [Aisha Huang] in jail in Ghana is not going to solve your money problem. It is not going to make you happy or me happy.”