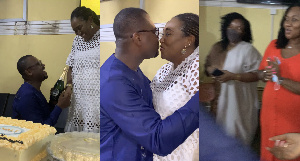 Wife of celebrated broadcaster Abeiku Santana, who goes by the name Genevieve Aggrey has surprised her husband a day after his birthday at the Despite Media’s ship house.

As captured by the lenses of SammyKay Media, the Okay fm presenter, for the first time in a long while was speechless after he saw some friends and close family members gathered at his work premises to surprise him and celebrate with him even a day after his birthday.

Despite his shocked demeanour, Abeiku Santana expressed his heartfelt gratitude to all those who pulled the surprise at him and stated that he is overwhelmed with the level of love shown to him by all and sundry and reserved a special appreciation to his wife who was the orchestrator of the big surprise.

Touched by the gesture from his wife, the multiple award-winning broadcaster passionately kissed his wife and indicated his kiss was a form of challenge to rival Shatta’s viral kiss video to his girlfriend.