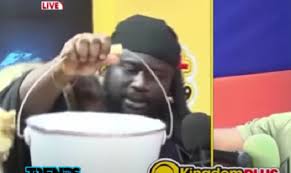 Ajagurajah discloses the type of sponge appropriate for bathing

Ajagurajah attributes most life crises to ‘wrong ways of bathing’

Just when Ghanaians thought they had seen and heard it all from Ajagurajah, the controversial man of God pulls another antic by showing up at a radio station with two metal buckets.

The man of God who was invited for an interview at Kingdom FM, brought out the metal buckets, a yellow sponge and some bottles of concoctions, to the amazement of everyone present.

The radio show host, Fiifi Pratt, together with some individuals present at the studio were dissolved into serious laughter.

Sista Afia who was also present to promote her new song, couldn’t help but burst out in laughter.

“Ghanaians do not know how to bath. Some individuals go to school to learn all sorts of things and it is in the same manner that bathing should also be studied. People are even coached on how to walk so they can be approached by men. We don’t just bath anyhow with sponge and soap. Even with sponges, there is a particular colour that we’re supposed to bath with.

“If I were some Ghanaians, I’ll never bath under shower. There’s a reason our forefathers used to bath in metal buckets and they had so much money. Anybody whose bathing bucket falls from his or her hand is a warning that you need serious protection. It’s a warning that you need to be under a cover,” he stated during a discussion with Fiifi Pratt.

Ajagurajah disclosed that there is a high tendency that individuals facing intense hardships in life were not properly bathed during their birth.

To buttress his claims, he quoted Hezekiah 16:4 which reads:

Demonstrating what he termed as the right bathing process, Ajagurajah said it is always appropriate to hold the sponge in the left hand and the soap in the right.

Also, he said it is never right to dip sponge in the water but rather splash the water on the sponge.

Can an unvaccinated Ghanaian be prevented from entering his own country? – Baako queries GHS

Amid fear of Omicron variant: Zoomlion Massively Disinfects Kotoka, Others