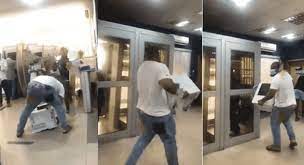 An unhappy man created a disturbance in a banking hall by dragging away the printer in anger, as captured on video.

The incident occurred in Asaba, Delta State, according to the report. This unpleasant method was chosen by the individual whose cash had been missing for two months in order to get the lenders to look into his case.

The man who was on his way to the door with the printer came to a halt and inquired if they were now ready to help him.

Other people can be seen pleading with him and attempting to calm him down in the video. Nigerians’ complaints about missing monies from their bank accounts, which take a long time to be repaid, are no longer unusual.

Previous Unidentified killed and half-buried body discovered at Bole
Next Cedi breaks the 8, selling at GH¢8.12