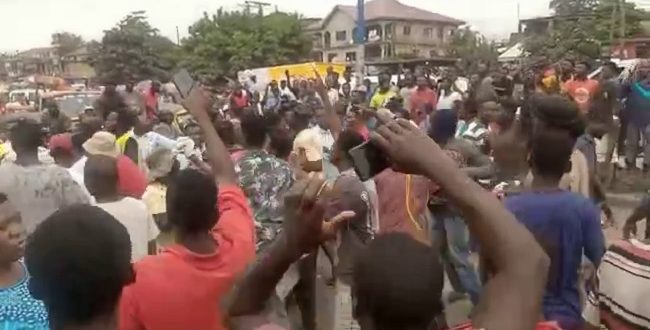 Residents in the Suame constituency in the Ashanti region booed at the Member of Parliament (MP) for the area, Hon Osei Kyei-Mensah Bonsu, and asked him to vacate his seat as parliamentarian.

According to the residents, the MP has failed to develop the area, in terms road infrastructural and his inability to create jobs for the youth since his 24 years as constituency MP.

The residents for the past one week have demonstrating against the deplorable state of roads in the constituency, the latest being the Suame-Maakro stretch.

On Thursday, July 14, 2022, artisans and traders at the Suame Magazine blocked the Suame-Maakro stretch in a protest against the dusty road, which affecting their businesses.

In a latest demonstration on Monday, July 18, 2022, at Maakro, the residents, who booed at the MP in an attempt to calm them down, asked him to step down for his failures.

Otec News’ reporter, Simon Opoku Afriyie, who was at the scene said the MP, in a company of his police guard, had to run away to save his life.

The residents claimed the MP has failed to lobby development projects and jobs to the area and is only interested in his welfare than those who elected him to parliament.

“Hon Osei Kyei Mensa Bonsu has failed as MP for the past 24 years, his failure to develop the areas and his inability to create jobs for us is enough for him to vacate his seat humbly,” they said.

“We don’t need him here again, he must vacate his seat and allow a compassionate person to represent us. He is very lucky to have ran away to save his life,” they angrily told the reporter.