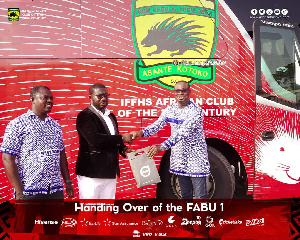 Kingdomfmonline.com can confirm that the new bus is in Kumasi, hence, the club will start using it for the Ghana Premier league second-round games.

The porcupine warriors unveiled a new 36-seater team bus ahead of the commencement of the second round of the 2021-22 league season.

The bus was given to the Kumasi-based side as part of the club’s new partnership with the financial institution, Access Bank, in a deal that will see the two parties mutually benefit.

The club made the announcement of the acquisition of the new bus through a social media post on Wednesday, February 23.

The club sits atop the Ghana Premier League table and hopes to emerge as champions at the end of the campaign.