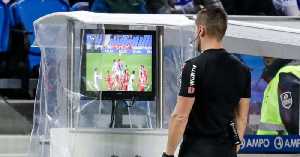 The Referees Manager of the Ghana Football Association, Alex Kotey, has hinted that a Video Assistant Referee [VAR] system will be introduced in Ghana by 2023.

According to the retired referee, Ghana has already started the process of acquiring the VAR machines.

He explained that Ghana is the only country in the West African sub-region to have undergone the process of acquiring the VAR machines.

He noted that with the right funding, the GFA would be able to introduce VAR in Ghana by 2023.

“We started the process with FIFA and CAF but somewhere when we got to the stage where funding had to come in, we had to halt,” Alex Kotey said in an interview with JoyNews.

He added in the interview monitored by GhanaWeb, “FIFA is also introducing different technologies because some African countries have to be helped in that area. We want to exploit all the avenues to ensure that the VAR comes to fruition; in our sub-zone in West Africa, we are the only people who started the process.

The VAR is a monitor that helps match officials in association football to review and make an analysis of a situation before making decisions.

Previous WhatsApp will no longer work on these iPhone models
Next He’s best cleaner in prison; have mercy – Hushpuppi’s lawyer to court