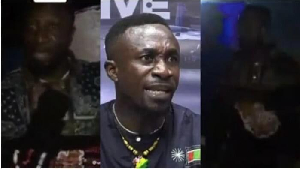 In a video that has gone viral, Ghanaian social and political activist Avram Ben Moshe is shown being accused of having sexual relations with a married lady.

According to the footage that we have access to, the young religious debater can be seen surrounded by several other young males, all of whom accuse him of dating the wife of another person.

In the video, Avram Ben Moshe can be heard begging one of the young guys to stop photographing him and imploring them to stop filming him.

It would seem that Avram booked a room for a woman who is already married to another individual. After he was apprehended, his last words were overheard to be, “…do you know who booked the room?”