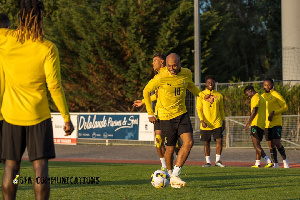 As has become a custom or tradition, the Black Stars of Ghana climaxed their preparations for the game against Brazil with a hot jama session on Thursday, September 22, 2022.

After four days of grueling training where coach Otto Addo and his coaching team took the team through the various tactical plans for the game against the South American giants, the players enjoyed some jama sessions to ease the pressure.

In the absence of legendary Asamoah Gyan, goalkeeper Richard Ofori has assumed full duties as jama leader with his deep voice and dexterity in ‘traditional’ jama songs.

He led the session which had the 28 players, the technical and management team as well as some FA officials.

The Black Stars are fully prepared for their first pre-World Cup friendly with many expecting an improved performance from Otto Addo’s side.

Ahead of the game, coach Otto Addo spoke to the press and express his team’s readiness and preparations.

Otto Addo said that performance at club level will play a huge role in his selection for the game against Brazil.

“I will not declare there is pressure, but this is the job as the coach; you always have to find difficult decisions,” he said.

“Also, let’s take it like everybody is doing bad; then it is also a difficult decision. This is the way we want to have it; we want our players to have success at their clubs, we want them to score but also to defend well, to play well, and have assisted.”

“This is for us the measurement. Previous games, performance at their clubs, and they are still training. Also, our style of play, our opponent players, and what we need going into the game. The performances at the club is taking a big part in the decision-making.”

As tradition demands, the ????????Black Stars ended training in the name of the Father,Son,Holy spirit and JAMA!#JoySports pic.twitter.com/9Ebh07SSog