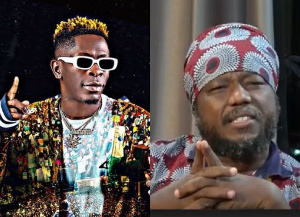 VIDEO: Change from your evil ways – Shatta Wale claps back at Blakk Rasta

In an interview on GhanaWeb TV’s The Lowdown with Ismail Akwei, Blakk Rasta, a Ghanaian reggae musician who doubles as a radio presenter, called out Shatta Wale for failing to make any positive impact in the lives of his large fanbase.

Blakk Rasta, who is an ardent critic of Shatta Wale, posited that the popular artiste who has enriched himself keeps on bragging about his expensive diamond and gold pieces of jewellery, whereas his fans wallow in poverty.

“You have a lot of following, what are you doing with it? That is why I keep talking about Shatta Wale time after time. You supposedly have a huge following, but what are you teaching that following? It is about insults and fooling all over the place. That is all that you are doing,” these were Blakk’s statements to Shatta.

Reacting to this in an Instagram Live session on Thursday, September 8, Shatta Wale, who was displeased with the singer’s latest accusation, admonished him to desist from his constant attack on his brand.

Shatta added that he is very dear to God Almighty, the reason why he ensures to deal with people who come at him for no reason.

The leader of the Shatta Movement has cautioned Blakk Rasta to change from his evil ways.

“…I still keep on doing like what I came to say about Blakk Rasta that he should change. He should change his ways because he is the person who insults God’s child and calls him a foolish and stupid boy and also talks about him for supposedly spending money anyhow. Blakk Rasta, you can’t show anybody anyhow, because somebody can show you anyhow.

“I am a forking gift of God. I love you guys but I am gonna be coming here every time,” Shatta stated with a sad face.