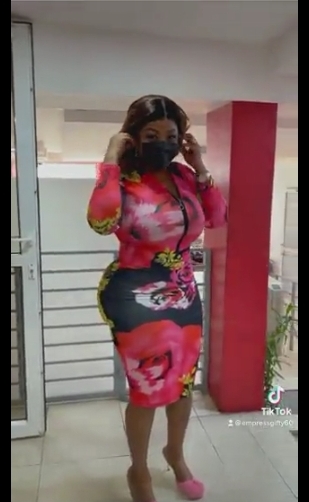 Empress Gifty steps out in style

Looking good is part of my branding, Empress Gifty

Gospel musician, Empress Gifty, has stated that she puts effort into her physical outlook because it is part of her branding.

Looking beautiful is also her special way of glorifying her maker.

In a 36 seconds clip shared across her social media platforms, the ‘Eye Woaa’ crooner was captured in a tight floral bodycon dress where she put on display all her curves. She appeared snatched!

According to followers, Empress Gifty applied pressure and made a public statement with her choice of outfit in her recent radio interview appearance.

The wife of New Patriotic Party‘s Hopeson Adorye rocked a pink 4-inch heel to complement her pink and yellow bodycon flora dress. As expected, Gifty’s makeup and hair was on point.

Addressing a section of the public who have criticized what they describe as her ‘worldly’ style of dressing, she stated that most of these people are either jealous of her or angered because they cannot afford what she has.

“Most of the things they say, maybe they don’t have it… either it is jealousy or it is beautiful and they just want to talk about it. Anything you are doing in the ministry and people don’t talk about you and always praise you, then you have a problem. There is a question mark. So, this tells me I am doing something right and these people are talking about me.

Watch the viral video of Empress Gifty below: