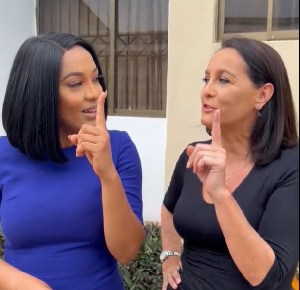 The French Ambassador to Ghana, H.E. Anne-Sophie Avé, has left social media users rolling on the floor after she attempted to speak Twi.

In a video that was shared on Instagram by actress Nikki Samonas, the ambassador was asked to translate from English into Twi how to find one’s way.

Although she was able to give a better-translated version in a different way ‘Mesere wo, mayera; boa me’ which means ‘Please help me; I’m lost’, Nikki wanted her to try the repetitive version.

According to Nikki Samonas, she wished for her to say ‘show me the way’ which will translate into “kyer3, Kyer3 me kwan” and so the ambassador without any help did but the accent was hilarious.

The Ambassador’s accent and how she communicated with her face got the actress laughing so loud. Anne Sophie couldn’t hold her laughter as well and said she sounded more Chinese than Ghanaian.

The Ambassador’s video with the actress follows a statement she made that she wouldn’t mind staying in Ghana should she find the man of her dreams before leaving Ghana in August 2022.

Explaining why she wouldn’t mind settling down with a Ghanaian man, Anne added that Ghanaians have not been anything but so sweet to her since her arrival into the country, hence, won’t think twice about marrying a Ghanaian.

Scroll down for the video