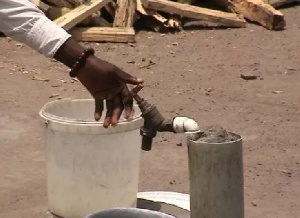 An unnamed man residing at East Legon has been arrested for illegally connecting to the main water supply for the community.

The arrest was effected by the taskforce of the Ministry of Sanitation and Water Resources on Sunday, April 10.

Addressing the press on Monday April 11, the sector minister, Madam Cecilia Dapaah detailed that the actions of the unnamed man caused the East Legon community to be denied water supply.

“We also have the challenge of illegal connection. Just yesterday, a resident of East Legon was caught red-handed. He had connected two big pipes into our mainline and had denied the whole catchment area of water,” she said.

She added that the man while denying the community access to water by his illegal activity was also selling the water to the community members.

The Minister stated that the said man will be prosecuted on charges of illegal connection and selling of water without permit while efforts are made to retrieve all revenue accrued from the sale of the water.

“When he was apprehended and the pipes were disconnected, immediately water started flowing into peoples homes. But the most serious aspect of this crime is that people whom he had denied water through the illegal connection were buying water from him.

“He was selling water to them. Illegal connection, illegally selling water without permit so I think the MD today [April 11] will handle that issue and he will surely be handed over to the police.

“And I hope he pays up for the number of years or months he had wrongly done [this] and also I have proposed that we started very soon do a house to house audit of the water we supply,” Madam Cecilia Dapaah indicated.

Previous Meet Kojo Jones’s mother who is a Reverend Minister
Next Kwahu Easter: Police announce heavy presence ahead of event