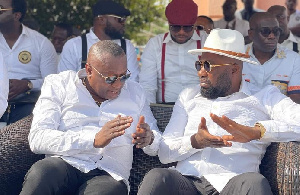 Members of the East Legon Executive Club weren’t left out of the jubilation ‘steeze’ after the Black Stars won their game against South Korea in the ongoing 2022 FIFA World Cup.

Touted as the crème de la crème of society, these affluent men were gathered at an unknown location where they watched the game live on a big screen.

Obviously proud and elated about the outcome of the match, they were seen chanting victory songs amidst loud cheers and applause.

Special Group of Companies CEO, Dr. Ernest Ofori Sarpong, and many other business moguls were captured in a viral video that showcased the jubilatory moments.

Dancehall musician Samini was also seen at the venue, ‘vibing’ with the wealthy businessmen.

Meanwhile, after a fierce battle with the South Koreans that led to a resounding victory for the Black Stars, Ghanaians are still basking in the celebration mood.