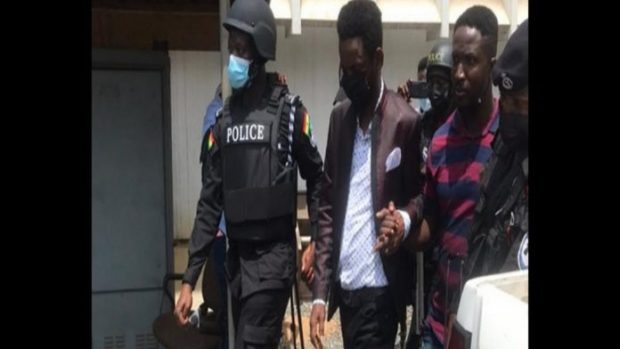 VIDEO: Jesus Ahuofe speaks on gun found in his room during police search

Self-styled prophet of the Founder and Leader of New Life Kingdom Chapel International, Stephen Akwasi, aka Jesus Ahuofe, has spoken up on a gun found during a search in his home.

A police house search became necessary after he was arrested and detained for a prophecy that found five persons including himself in police cells.

Jesus Ahuofe missed a doom prophecy on Dancehall King Shatta Wale, detailing how he would be shot and killed by assassins on October 18, a day after his 37th birthday.

Shatta and three members of his camp capitalised on the prophecy to start his shooting prank which according to his charges caused fear and panic.

After Jesus Ahuofe was arrested, the police organised a search in his home, which led to the discovery of a hand gun.

Speaking for the first time after his bail on Adom FM‘s morning show, Dwaso Nsem, Jesus Ahuofe confirmed he owned the gun which he said is licensed for protection purposes.

He indicated that he had registered the gun long ago and it was always kept in his safe.

According to him, he met his home in a ransacked state when he returned after a bail, and to him, it is an indication Ghana Police Service worked hard on his case.

He commended the service for their dedication in ensuring security in the country.

Previous VIDEO: Fella Makafui’s mood after Medikal was granted bail
Next One shot dead in chieftaincy clash at Prampram