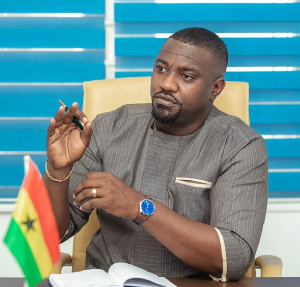 VIDEO: John Dumelo is not dead

On the back of rumours that John Dumelo has died, the actor, in his bid to clear doubts, has on April 13, 2022, released a video clip to address the issue.

Rumours were rife on Monday, April 11 that the actor who was the National Democratic Congress (NDC) parliamentary candidate for the Ayawaso West Wuogon Constituency in the 2020 elections, had died.

“I’ve had a lot of calls and people have sent me messages about some fake news on YouTube saying that I’m dead. It’s not true, I’m still alive. Today is the 13th of April, 2022. I’m still alive so just ignore this fake news and let’s all move forward in the Lord,” John Dumelo said in the video shared on his YouTube channel.

“I just hope and pray that these unscrupulous individuals who make up such trick stories would be brought to justice. If you want to get content, you don’t have to say something is dead. What are you trying to achieve? I’m alive and kicking. You have nothing to worry about,” he added.

“Whatever the enemy has planned will not prosper in Jesus name…” Dumelo prayed.

Tags DEAD Dumelo IS JOHN not