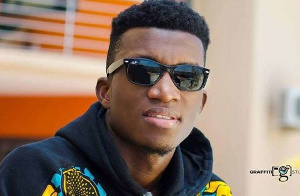 Reigning Highlife Songwriter of the Year, Kofi Kinaata, filled his fans’ eyes with tears when he broke down during a recent performance.

Kinaata was entertaining guests with a live band performance of his songs at an event believed to be a funeral thanksgiving event.

The excited patrons were filming him while singing hit song, Thy Grace, word-for-word, an action that caused the artiste to become emotional.

It wasn’t long until tears began trickling down his eyes over the massive outpour of love, which interrupted his performance.

He was consoled by guests before being led to his seat.