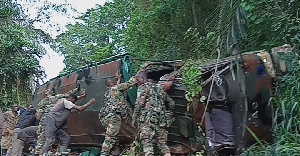 A group of soldiers were involved in an accident on Wednesday 9 June 2022, along the Suhum–Anum Apapam Road.

A viral video of the scene shows several soldiers lying on the road with some looking near lifeless.

The officers were being helped by some community members and other members of the troop who survived unscathed.

The transport track which the soldiers were travelling in is seen overturned and lying sideways with some parts mangled from the impact.

Meanwhile, the Ghana Armed Forces in a statement has confirmed the accident in which some 16 officers sustained various injuries.

According to GAF, the military transport truck developed a mechanical fault causing the car to tip over.

The officers who were returning from an Operation Halt campaign against illegal mining are said to be responding to treatment while others have been discharged from the hospital.

Previous This Week On #TwitterGhana: Sugargane Remix Out, BBNaija Reunion and many more
Next Forensic investigations reveal Naira Marley was involved in cyber fraud