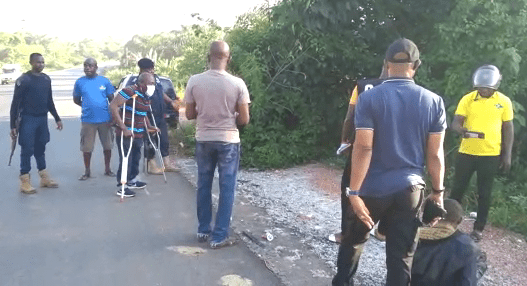 A suspected armed robber has been gunned down by police officers of the Jacobu District Police Command on Tuesday May 11.

date rush
The Police also arrested three other suspects on the Obuasi-Anwiankwanta stretch of road in the Ashanti Region.

Jacobu District Police commander, Superintendent Abdulai Iddrisu speaking on Akoma FM’s current affairs and political show GhanAkoma, said that the incident happened around 2:00 am Tuesday dawn when the police personnel clashed with the suspects in a heated gunfire exchange which resulted in one being killed.

“At about 2am, during our usual patrols, we chanced on the suspects, they thought we were ordinary civilian after they realized the police car they opened fire so we had to react, in the course of the fire exchanges we were able to gun down one and subsequently arrested the other three suspects”

The three, are currently in police custody assisting in investigations.

The Obuasi enclave is noted to be a flashpoint for criminal activities, similar robbery incident happened within the same area after armed robbers ambushed a bullion van and made away with thousands of cedis and also killed a police officer.

Superintendent Abdulai Idrisu told host of the showAduanaba Kofi Asante Ennin that police are not relenting on the fight to crackdown armed robbers in the area.

“I will use this your big platform to allay fears that has gripped residents, they should go about their normal duties we are there to protect them,” he said.

He further appealed to residents to assist police by reporting any suspected robber to the Police for the appropriate actions to be taken.