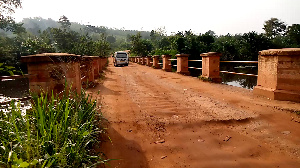 Several concerns have been raised by drivers, residents and various stakeholders over the years concerning the current state of the Oterkporlu Bridge in the Eastern Region. And this may not be imaginary fears but those arising out of the old age of the bridge with visible structural defects and very narrow.

This is especially so taking into consideration the volume of traffic that it carries on a daily basis.

Fears are that the bridge which GhanaWeb learnt was constructed in the 1920s which links the three Krobo Districts including Upper Manya Krobo, Yilo Krobo and Lower Manya Krobo could cave in anytime.

Moses Ayenor is a driver of a commercial vehicle and has plied the Odumase-Asesewa road for the past 20 years.

He expressed concern about the weak nature of the bridge and called for its reconstruction.

“It’s true [that the bridge is weak]. It’s a matter of concern to us. There are usually problems in crossing from one side to the other whenever it rains,” said the worried driver. “This bridge is an old bridge so they must come and reconstruct a new one.”

To him, the facility has outlived its purpose and could collapse at any time. He said “it can collapse, it would bring problems.” He maintained that persistent complaints to authorities including the Municipal Chief Executives and the Ghana Highway Authority (GHA) to fix the facility has not yielded the required results.

Another driver who spoke with GhanaWeb is Teye Joseph. The driver who also plies the Odumase-Asesewa road has used the bridge for the past years.

His concerns were no different from those of Ayenor as he accused the GHA of leaving out the bridge even during the construction of the Odumse-Asesewa highway.

“The bridge is not good and must be repaired,” Teye Joseph demanded adding that “it [the bridge] can collapse. If you are able to observe the underparts, the under is all cracked and this is dangerous for us.”

He therefore pleaded with the authorities to as a matter of urgency attend to their concerns by either repairing the existing bridge or replace it with a new one.

A taxi driver who only gave his name as Agyemang said he has used the bridge for 8 years now and worried over its current situation.

He said “the bridge is really damaged. If you look under it, you’d see that whenever a vehicle passes over it, the metal barriers disengage from the concrete slabs holding the bridge.”

He added. “We plead with you to come and replace the bridge for us because the situation is getting worse.”

Jacob Terkpenor, a taxi driver has also used the bridge for four years now. He said “the bridge is weak, secondly too, whenever they open the Kponokli irrigation dam, the river level rises to the level of the bridge which weakens it. The bridge is also too narrow to allow for two cars to pass at the same time.”

Concerns have also been raised about the river overflowing its banks during the rainy season and whenever the nearby Kponokli dam is opened which poses great danger to both drivers and passengers.

Describing the situation whenever the Kpornoli dam is opened, a resident of Oterkporlu, Peter Kwasi Wayo said parts of the untarred road adjoining both sides of the bridge is submerged in the excess water.

He joined the drivers to call for the construction of the roads running through either side of the bridge.

Another resident whose house lay few meters away from the bridge and river also said the opening of the irrigation dam poses a great deal of threat and inconvenience to his house as the water rises to his “doorstep” with the opening.

Assemblyman for Oterkporlu, Ebenezer Teye Narteh who observed that the bridge is not in the best of condition, described it as a death trap.

“As for the bridge, everybody can see its not in the best of position at all. Its now, let me say a death trap,” he said, fearing that disaster could strike during the impending rainy season.

“This bridge, I’ve even told my people that if we’re not lucky this year, the water will take it away because even we’re in the dry season but you can just see the amount of water so what about from March, April to September that we’re going to experience heavy rainfalls, you’ll agree with me that this bridge will not be there and we don’t have to wait until there is a disaster before we act.”

To him, urgent steps must be taken to avert any disaster.

Meanwhile Eastern Regional Director of the Ghana Highway Authority when contacted by GhanaWeb said constructing a new bridge to replace the existing one remains a top priority for the government.

Mr. Charles Adobofour said the Oterkporlu Bridge was part of 50 bridges earmarked for construction in various parts of the country to be sponsored by the Czech Republic.

According to him, though the Odumase-Asesewa road was constructed 6 years ago, a decision on what to do with the bridge “became a thorny issue” as no decision could be reached on it.

“The government is constructing 50 bridges from the Czech Republic, they are going to construct what we call composite bridges [a combination of steel and concrete] so it’s something that I’ll say is a priority as far as the government is concerned,” said Mr Adobofuor.

He said though works were expected to commence in October, 2020, this could not materialize, adding that the Oterkporlu Bridge is part of the first phase of bridges to be constructed.

“Even I’ll say that the 50 bridges, if my memory serves me right, about four or five are ready and out of the five that are ready, Oterkporlu is part of it so it’s a top priority roads that the government has picked,” he said.

Rather than repairing the existing bridge, the highway director said a new bridge would be constructed at a different place to replace the old bridge. 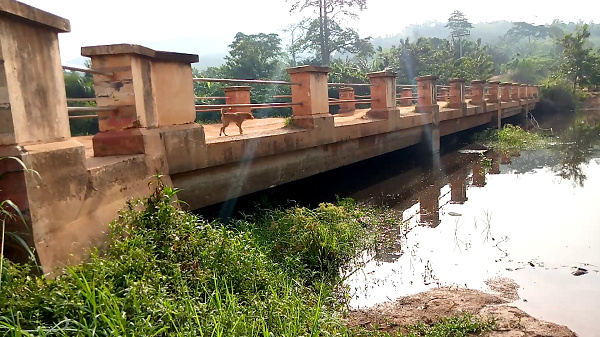 Previous How I jumped from a heartbreak into the arms of my husband
Next VIDEO: Did Hawa Koomson jubilate before her approval?