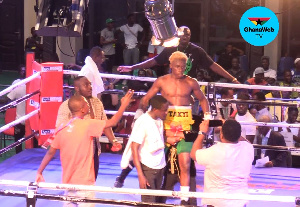 Ghana’s Olympic medalist, Samuel Takyi, began his first professional bout on a good note as he earned a Round Two Technical Knockout [TKO] over his opponent Kamaldeen Boyefio on Good Friday, April 15, 2022, at the Bukom Boxing Arena.

Takyi made a lightwork over Boyefio in their six-round Lightweight contest which was on the cards of Bazooka Promotions own by former world boxing champion, Ike Quartey.

The 20-year-old boxer was on fire from the first bell as he landed some heavy punches that knockdown Boyefio on three occasions in the first round.

Boyefio missed an intended right hook from Takyi but was met with a hefty left punch which sent him to the canvas.

The experienced boxer recovered to continue the fight but soon visited the canvas again when a right-hand punch landed on his cheeks. Boyefio was able to beat the referee’s count to continue the bout.

The Olympic bronze medalist seeing how weak his opponent was took advantage to land some punches on his head to score more points. Boyefio held on to his punches and released them one after the other.

Two straight punches on the head of Boyefio led to his third fall in the same round but again he beat the referee count to proceed with the bout but he was saved by the bell to end Round 1.

In the second round, the 32-year suffered a similar humiliation in the first round as he fell on three different occasions.

Seeing the damage which could occur to the journeyman Boyefio, the
referee, Erasmus Owoo, stopped the bout after a barrage of unanswered punches from Samuel Takyi.

Watch highlights of the fight below

Previous LIVESTREAMED: Third edition of Y Clash of The DJs
Next A brief history of the floating market of Benin