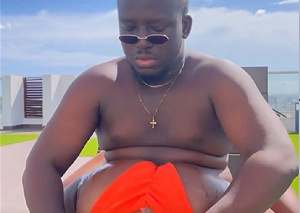 In a bid to contest popular Nigerian sound producer, Don Jazzy, after he started the challenge, Ghanaian comedian, SDK, has also shared a video where he is sensually massaging an almost naked girl.

Spotted wearing just an orange thong, the massage recipient was made to lay face down while her thighs were raised and parted around SDK’s stomach.

In the video which has since gone viral on social media, the said girl’s butt and waist were rigorously oiled and rubbed by the popular skits-maker, who was seated directly under the sun in an open space.

Repeatedly, he oiled and rubbed his fingers over the girl’s entire body but the main focus was on her butt, even as he spanked them several times in the process.

The video which currently has over 13,000 likes and 600 comments, has also garnered several comments from several Ghanaian celebrities.

It has also been featured on the official Instagram page of Don Jazzy’s Mavin Records.

Previous Inside the Akwasidae festival that celebrates the Golden Stool brought down from heaven
Next First photos, videos from Rita Dominic’s traditional wedding