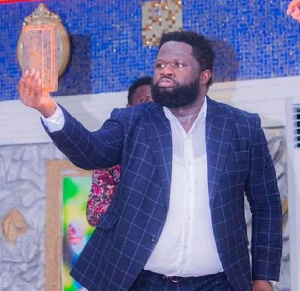 A viral video that captured a Kumasi-based preacher, Great Azuka, being adorned with money by members of his church has sparked outrage among a section of the public who have condemned the act.

Great Azuka nicknamed ‘Ogya Nyame’ translated in English as ‘Fire God’ has been at the center of controversies over fake prophecies, popular among them was his failed prophecy about the Black Stars.

Back in 2021, he predicted that the National team would not qualify for the Africa Cup of Nations (AFCON), but the team sealed through.

The leader and founder of Shining Grace Chapel has once again been called out by the public for what they describe as wrong practices in his church. This comes in after he permitted members of his church to kneel and worship him.

A video that has been widely shared captured some worshippers bowing down at the feet of Azuka to present their offering. They also anointed their foreheads with the supposed power from his shoes.

Reacting to the unusual practice in his church, some Christians argued that his actions are against the Ten Commandments which instruct believers not to worship any other God but Him.

An Instagram handler @wrldprincecharming who was appalled wrote: “They have turn the house of GOD into a business place these days.”

Ghanaian comedian Jacinta had this to say: “This is not Godly and there’s nothing anybody will tell me! Bye.”