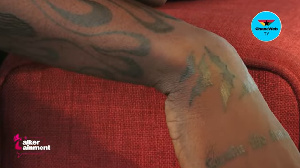 Body art has since its introduction become a fashion statement and as the day goes by, the craze for getting tattoos keeps rising.

These tattoos, according to those who have them, are symbolic. The designs which come in different forms could be inspired by special beliefs, influential persons in their lives, and epic events, among others.

Showing up for an interview on GhanaWeb TV’s Talkertainment, Black Sherif’s tattoos were too visible that they could not go unnoticed. The 20-year-old award-winning musician who hails from Konongo in the Ashanti Region had five tattoos on his right hand.

He had the flames, bats, Kwaku The Traveller, the mountain goat and one to tell his mother how much he loves her.

Explaining the idea behind the ‘mountain goat’ tattoo, Blacko said it symbolized perseverance.

“We climb any circumstance,” the musician explained.

Black Sherif has become a world sensation and has been celebrated by both local and international superstars including Burna Boy, Tim Westwood and Timbaland.

Prior to the release of the music video, Blacko won two awards at the 23rd Vodafone Ghana Music Awards – Best New Artiste of the Year and Best Hip-hop Song of the Year.

He also won the Best New Artiste at the 5th edition of the 3Music Awards.