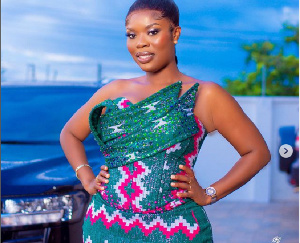 VIDEO: The ‘mystery’ behind Delay’s toughness

Until June this year when she shed tears on radio while addressing suggestions by many to “keep quiet” amidst attacks from certain quarters, Delay was seen as a tough media personality. Regardless of the fact that she broke down during that narrative, one thing appears to have been established in the minds of a section of the populace – ‘Delay is not a pushover’.

Known in private life as Deloris Frimpong Manso, the celebrated radio and TV personality in the latest episode of The Delay Show which featured Lasmid, disclosed the circumstances under which she was born, stressing that she is thick-skinned as a result.

“In the early 80s, there was a curfew when my mother’s water broke. She was rushed to the hospital. On her way, she gave birth to me in a taxi. I was born in a taxi,” Delay recalled. “From the moment I was born, people began talking about me; gifts were received on that very day as well. So, I’m used to the name calling. I’ve vowed and I’m prepared to fight those who fight me in this country rigorously.”

Prior to her June 2022 moment, Delay had taken a dig at an unidentified woman while crowning herself as the topmost presenter in Ghana. Typical of her introduction to her weekly interviews, she placed herself above colleagues, including her contemporaries.

“None can be compared to me; whether the old or the new generation. I am second to none. My fans on various social media platforms are solidly behind me,” Delay said in the Twi language as she rhymed on The Delay Show.

Delay is regarded as a fine interviewer due to her countenance and line of question during interviews. She has been on TV for over fourteen (14) years and has established herself as a formidable brand.

In 1999, Delay started her broadcasting career with Life FM in Nkawkaw in the Eastern Region. She joined Top Radio, Accra, in 2005 as a midmorning show host until 2007. Between 2007 and 2016, she worked with Oman FM. While at Oman FM in 2008, Delay started her television show ‘The Delay Show’ which has been vibrant to date.

After going off radio for a while and focusing on The Delay Show, Delay is back on air as host of Accra-based Wontumi Radio’s drivetime show.

Tags behind Delay’s mystery THE toughness