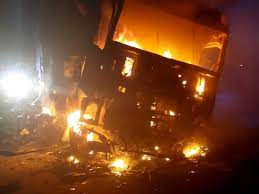 Two trucks were torched on the N1 near Grasmere in Johannesburg on Wednesday night.

Johannesburg Metropolitan Police Department (JMPD) spokesperson Xolani Fihla said a “violent protest” broke out in the Finetown area, resulting in rocks and debris being strewn across the highway.

Trucks travelling on the N1 south near the Grasmere Toll Plaza as well as on surrounding provincial roads were targeted during the protest.

The flames on the two trucks that were set alight were extinguished on Wednesday night.

Fihla said JMPD officers had also removed rocks and debris from the road.

On Thursday morning, Fihla said traffic on the N1 was free-flowing and the area was quiet.

The protest appears to have been sparked by a service delivery dispute.

“The residents of Finetown were protesting over an electricity outage, which was a result of an earlier operation where electricity was disconnected due to non-payment and illegal connections,” said Fihla.