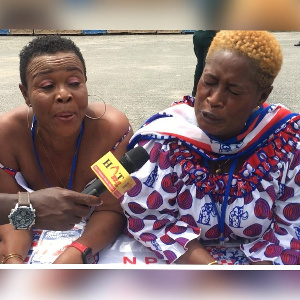 VIDEO: We will sacrifice our ‘honeypots’ to help NPP retain power in 2024 – Strong NPP women vow

Two staunch female supporters of the ruling New Patriotic party (NPP) have vowed to sacrifice their private parts to help the party to retain power in 2024.

The two staunch supporters of the ruling party made this damning revelation at the 2022 National Delegates Conference of the NPP which took place at the Accra Sports Stadium on Saturday, July 16.

Speaking to Hot 93.9FM about the performance of the NPP government, the two staunch female members of the party, said:

“In 2000 we displaced our vaginas and the Party came to power…we were really caned for doing that, we love the party so if we have to sacrifice our vaginas to help the party to retain power we shall do it”. They told Hot 93.9FM

In all, 46 candidates contested for ten national executive positions of the NPP.

Some 6,000 delegates voted in the elections, including selected party members from all the 16 regions in Ghana plus some members from the diaspora.

Mr. Stephen Ntim became victor as the new National Chairman of the Party.

Previous The beauty of winning the VGMA isn’t in the plaque – Black Sherif
Next Meet Fredrica Agyeiwaa Osei, The JHS Students With An 80 – Page Story Book