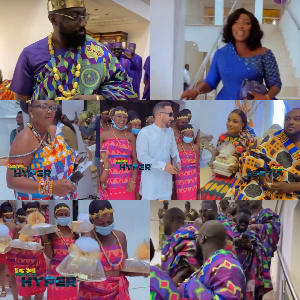 The traditional marriage ceremony of the real estate mogul and CEO of Empire Domus, Emmanuel Kojo Jones, is ongoing in the Ashanti Region.

The wedding ceremony of the self-acclaimed ‘Ghana’s future President’ has seen dignitaries and royalty present for the union of Kojo Jones and his wife to be, Rachel.

Live updates from the ceremony shows how the over 30 groomsmen donned in bright royal kente cloths.

The groom was spotted wearing a purple coloured kente fabric with a crown and a huge gold chain around his neck.

Present with the groom and making jokes were his over 30 groomsmen split into two groups wearing really interesting designs to parade themselves with for the wedding.

A set wore a kaftan while another group dressed throwing the traditional kente fabric over their shoulders.

On March 22, 2022, the young successful businessman in a viral video was spotted parading a convoy from Accra to Kumasi to wed his wife to be.

The convoy he paraded to Kumasi was made up of some of the most expensive vehicles which included 2 G wagons, 5 V8 vehicles, a 4-wheel Lexus ride, a Range Rover, a heavy ford and Chevrolet pickup trucks, a party bus, a small Hyundai salon car, a coastal bus and a minibus all on the road to Kumasi.

In one of the viral videos shared by blogger, GHhyper, the businessman and his team made a stop at Suhum to pick up some family and friends who were chaperoning him on the trip to bring home his wife to be.