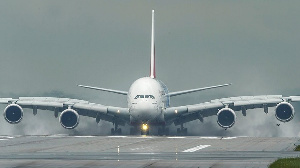 After almost four years since the Emirates A380 touched down in Accra at the Kotoka International Airport, Ghana has yet again witnessed another historic landing at the same venue.

This time, a British Airways A380, which is one of the largest passenger aircraft in the world, touched down in Accra on September 29, 2022, making it a historic second-time flight into the country.

Sharing the details via Twitter on September 30, former Ghanaian Emirates pilot, Captain Solomon Quainoo wrote; “Accra had a pleasant surprise yesterday having a historical 2nd time an A380 operated (by British Airways) into Kotoka International Airport. Almost exactly 4 years after we flew the Emirates A380 into Accra for the first time.”

He added that the second historic landing of the largest passenger aircraft proves that Ghana’s main airport [KIA] has the capabilities to handle such fleet.

“Such a great sign for the impressive capabilities of our home airport to handle the world’s biggest passenger aircraft,” Captain Quainoo added.

Previous Chief, others injured as anti-galamsey taskforce clash with illegal miners
Next ‘Who is in charge of security, why have we not been able to stop galamsey?’ – Asantehene