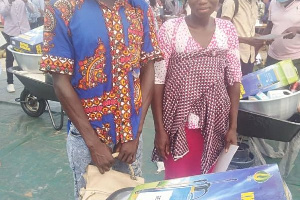 Madam Aberesi, together with her spouse, Mr Stephen Nkrumah also a farmer, have large acres of cassava, okra, maize, plantain, and pepper.

For her prize, she was presented with a wheel barrow, spraying machine, cutlass, and a pair of wellington boots.

In all, 13 farmers were presented with certificates and awards ranging from cutlasses and tricycles.

Speaking to the Ghana News Agency (GNA) on the sidelines of the event, Madam Aberesi called for training, motivation, and support for Persons With Disabilities (PWDs) to ignite their interest in farming.

She encouraged the youth to consider venturing into agriculture because it was a lucrative area that had the potential of supporting their livelihood.

She commended the Government for introducing the Planting for Food and Jobs initiative, which she said would make the country self-sufficient in food production and exports.

However, the Ministry of Food and Agriculture (MoFA) should make clear policies and programs that would be disability-friendly to attract them into the sector, she appealed.

Mr Willyevans Obiri-Awuah, District Chief Executive, urged the youth to erase the perception that Agriculture was for the less privileged, adding that it was rather for people who were determined to make a mark in feeding the nation and the World.

He also charged the youth to avail themselves and venture into farming because Government was assisting to transform the sector.

Source: GNA
Related Topics:awardFarmer
Up Next

These are some proposals MPs received on resetting E-levy