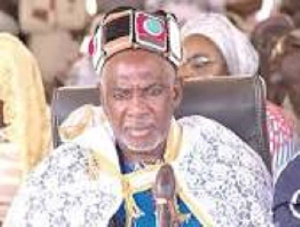 He said the move was however not with prejudice to the outcome of the Parliamentary deliberations on the issue currently ongoing.

According to his Majesty, even though he knew the issue was before the Parliament of Ghana, he felt it was necessary to take action to prevent the situation from escalating among his subjects knowing how long it sometimes takes to get a bill passed in the august house.

“We are aware the issue is before Parliament. We trust our representatives to do the right thing. However, due to the fact that sometimes final results of Parliamentary deliberations take time in coming out, we see the need to act now. The situation may sink beyond salvaging by the time our august House takes a stand on it,” the Wa Naa explained.

The Overlord made the declaration during a Press conference at his palace Thursday, July 29, 2021.

Addressing the press on his behalf by his secretary, Jinpiahi Naa Kadiri, the Wa Naa falling short of prescribing the exact mode of punishment stressed that any breach of the ban would be met with a swift severe punishment.

Aside the ban, the Overlord in consultation with stakeholders, also issued some directives to religious leaders, parents and guardians, as well his subjects to help check the menace.

“All preachers should include (the homosexual practices) condemnation in their sermons. Prayers for Allah’s protection should be offered in the mosques and churches. General open-air prayers should be organized by the various religious groups and sects. A mammoth demonstration should be organized in protest against them. Parents and guardians must educate their children and wards on the evils of these practices, ” he directed.

In addition, a taskforce has also been put in place to identify with enough evidence, perpetrators of these practices for action to be taken against them.

He furthered that these directives were reached at, following consultations with stakeholders including chiefs, Tendeme (custodians of the land), Yerinamine (supreme spiritual leaders), Limaanhi ( leadership of imams), and all leaders of the various Islamic sects.

He said the press conference became necessary due to the increasing activities of the LGBTQI+ in the traditional area that was fast gaining grounds and therefore needed to take action to protect his subjects.

The Wa Naa posited that apart from being forbidden by all the major religions, homosexuality is also frowned upon and forbidden by the culture and traditions of the people.

He emphasized that: “The Holy Qur’an is replete with how people who transgressed this way were punished and all Muslims shudder to think of same punishment or even worse being meted to them for sitting aloof while they are being practised around them. Islam abhors them and Muslims dread the punishment for them.

“The rightly guided adherents of the Christian faith equally forbid them. The traditionalists who are puritans in their own right view the practices as unnatural. Their gods do not permit them and hence they are a taboo. Our traditions and culture do not just frown upon them, but also strictly forbid them.”