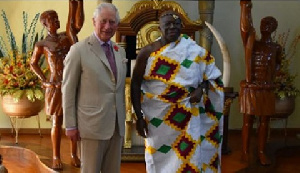 After ten days of mourning, Queen Elizabeth was buried at the King George VI Memorial Chapel at Windsor Castle on September 19, 2022.

World leaders, royals, and diplomats witnessed the solemn ceremony as Queen Elizabeth was ‘stripped off’ the royal title she had held for seven decades, before being lowered into the grave beside her father King George VI.

Multiple reports state that leaders of 167 countries – among them 18 monarchs, 55 presidents, and 25 ministers attended the funeral that took place at the Westminster Abbey.

The ceremony marked the end of her 70-year reign as the monarch of the United Kingdom and marked the beginning of King Charles III’s reign.

The Ghanaian conversation around the funeral has focused mainly on two things; the bus ride of President Nana Addo Dankwa Akufo-Addo and other world leaders and the invitation or otherwise of the King of Asante, Otumfuo Osei Tutu II.

Whiles the discourse around the president and his colleague presidents have been largely of unanimous condemnation and mortification, the one around Otumfuo divides opinions.

Opemsuo Radio, a media affiliate of Manhyia first announced the invitation of Otumfuo to the funeral. The report came with a photo of the supposed invitation that was sent from the Protocol Directorate of the Foreign, Commonwealth and Development Office.

Local media and some news outlets on the African continent run the story with Opemsuo Radio being the primary source of the reports.

A day after the reports went viral, the Herald Ghana published a front-page story, labeling the invitation as ‘fake.’

This triggered an inquest into the invitation or otherwise of Otumfuo Osei Tutu II. It is worth noting that in multiple reports on the BBC, France 24, New York Times and other internationally-acclaimed media houses, about the royals invited for the funeral, not once was Otumfuo listed as one of the 18 monarchs that were invited.

In the UK Guardian’s article, titled “Who’s invited to Queen Elizabeth II’s funeral – and who’s not”, there were mentions of the Japanese, Norwegian, Spanish, Monaco and other royals but that of Otumfuo was conspicuously missing. https://www.theguardian.com/uk-news/2022/sep/19/who-invited-queen-elizabeth-ii-funeral-us-turkey

Their report is not different from the one on CNN which came with the title “Who’s on the guest list for Queen Elizabeth II’s state funeral?. As seen below there was no mention of Otumfuo in the stories.

These reports could, however, have been an oversight or in the extreme case a deliberate mistake by the media who perhaps chose to focus on the more popular or European and Gulf Royals.

Though his report did cite any invitation, it will not be out of place to assume that the conversation was centered on officially inviting him to the funeral.

Otumfuo did not attend the funeral for stated reasons. A historian at the Manhyia Palace who confirmed his invitation explained why the Asante king did not honor the invitation.

The historian, Osei Bonsu Safo Katanka, speaking in an interview with Mr Emmanuel Quarshie (The Hitman), host of the Ghana Yensom morning show on Accra 100.5 FM on Monday, September 19, 2022 explained that the invitation letter failed to make preparations for a representative to represent the Asante King at the funeral, hence, no representative was sent either to represent the King.