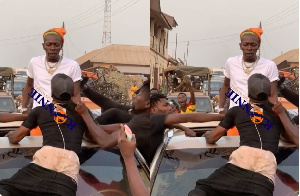 It was both a frightening and hilarious scene to watch when popular Ghanaian musician, Shatta Wale landed in Asankragua in the Western Region for the Sammertex 2021 concert.

One fan of Shatta Wale, who is obviously too ‘crazy’ about him jumped on the bonnet of the award-winning musician and tried to literally pull him out of the car in his quest to get a feel of Shatta Wale.

The fan who looked possessed by some evil spirit tried his possible best to pull the shirt of Shatta Wale but the bodyguards of Shatta Wale did their work diligently and got him off the car.

This rather bizarre scene was seen when Shatta Wale and Medikal stopped in the middle of the road to bless their fans with some money by spraying it in the air as soon as they finished a radio interview they went for in Asankragua ahead of the concert.