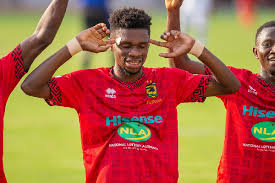 Mfegue connected a through pass with a low shot at goal but an Ashgold defender dived to intercept it with his hand and gave the referee an easy penalty decision to make.

Etuoga stepped up and sent the keeper the wrong way to put the Porcupines in the lead in the 62nd minute.

Five minutes later, a splendid buildup from the back saw a through pass flash into the Ashgold box, Mfegue latched on it with a shot the Ashgold defence struggled to clear. The ball fell on the path of Etuoga who slotted it in with a cool finish.

The Cameroonian completed his hattrick when he shrugged off a fierce challenge from the Ashgold defence to connect in a low cross from inside the box.

Watch highlights of the match below: