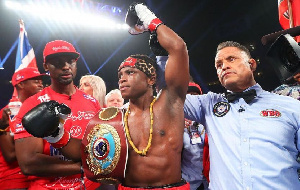 Watch highlights of the boxing bout that made Isaac Dogboe

Ghanaian boxer Isaac Dogboe has crawled back and his on his way to winning another World Title after his victory in the WBC final eliminator.

Isaac Dogboe secured another shot at the world title in the featherweight division after defeating Joet Gonzalez at the Grand Casino Hinckley, USA.

He won the WBC final eliminator bout against Gonzalez on a split decision after two of the three judges ruled in his favor.

Dogboe now has a chance to win another World-title as he could face WBC title holder, Rey Vargas.

As he prepares himself for another World-title bout, GhanaWeb reminds Ghanaians about the bout that made Isaac ‘Royal Storm’ Dogboe.

Isaac Dogboe in 2018 stopped America’s Jessie Magdaleno in the 11th round to win the WBO super-bantamweight world title.

Dogboe had to rise from the canvas in the first round but went on to knock the American down three times in the fight and force the stoppage in the 11th round at the Liacouras Center in Philadelphia.

Watch highlights of the game in the post below:

Tags bout boxing DOGBOE highlights ISAAC MADE OF THAT THE WATCH

Previous Tima Kumkum’s name pops up in discussion about Kofi Adomah’s confession
Next VIDEO: Married woman goes blind after boyfriend ch0pped her at a bush near river when she was pregnant