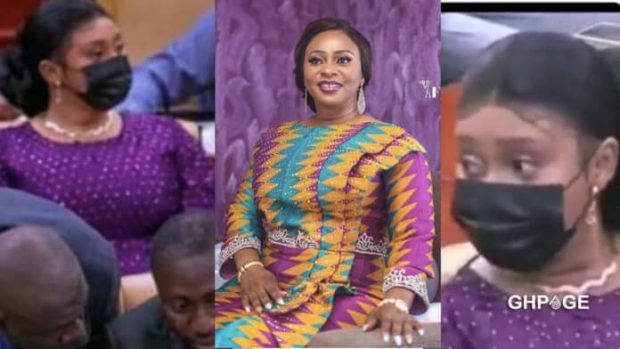 According to the NDC chief whip and some Ghanaians who have compared the picture of the alleged fake Adwoa Sarfo to that of the original MP’s, they are two different people although they share some similar body features.

Some social media users have also dug deep into the ocean to present pictures of an NPP big woman whom they strongly believe was assigned to impersonate Adwoa Sarfo in parliament so that the majority caucus could pass the infamous 2022 budget.

Apparently, many Ghanaians have also raised concerns about the genuineness of the woman who claims to be Adwoa Sarfo because the Dome Kwabenya MP was supposedly out of the country when parliament met last Tuesday.

However, more details about the fake Adwoa Sarfo keep springing from left-right-center and the latest amongst them is the real name of the woman.

According to what we have gathered, the woman who impersonated Adwoa Sarfo is Becky and is a leading force of the NPP women’s wing.

It has also been wildly alleged that Madam Becky who posed as Adwoa Sarfo has been swiftly sent to the US.

Check out the video below to know more…

Meanwhile, Adwoa Sarfo has broken silence on the scandal and according to her, she was the person in parliament last Tuesday.

Speaking in parliament yesterday about the disturbing issue, she said;

“As a former deputy Majority Leader of this House, I want to state unequivocally that I was present in this House yesterday (Tuesday)”

Related Topics:ADWOA SARFO
Up Next

How Alban Bagbin walked out of meeting over Kevin Taylor insults