Home / ENTERTAINMENT / WATCH: Rapper Blueface and girlfriend get into violent fight in streets 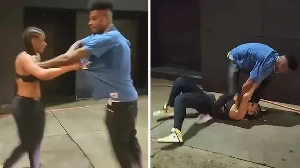 WATCH: Rapper Blueface and girlfriend get into violent fight in streets

Passers-by filmed the scene, which sparked a lively debate on social media for a few hours.In a viral video, a young woman named Chrisean can be seen provoking the rapper by grabbing his shirt and pulling him back while he was walking down the street. Finally, she pushes Blueface and punches him in the face.

Blueface, for his part, punches her in the head, throws her to the ground, and rips the chain around her neck.

She then drags him around the corner by his shirt before Blueface retaliates by punching her in the head multiple times.

Shocked, some passers-by on the scene chose to take out their phones instead of intervening, immortalizing this violent scene.

The images of the altercation were then circulated on the internet, sparking an outpouring of reactions. A witness said police were called, but by the time they arrived, Blueface and Chrisean had left the scene.

Tags AND Blueface FIGHT GET GIRLFRIEND IN INTO rapper STREETS Violent

Previous Why make Ghana Card the only means of identification? – Afari Gyan asks
Next Akua Amoakowaa opens up about relationship with Dr Kwaku Oteng after divorce