Home / ENTERTAINMENT / WATCH: Reggie Rockstone finally explains why he got angry at his wife for flirting with another man 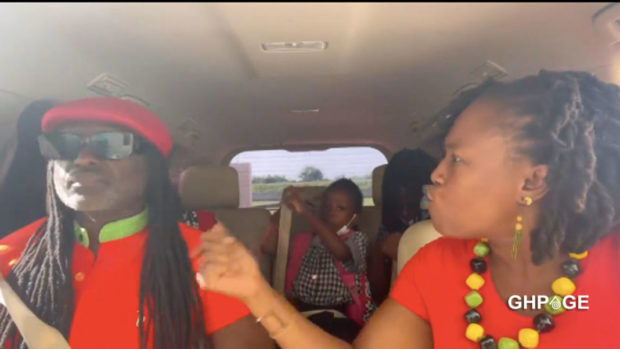 WATCH: Reggie Rockstone finally explains why he got angry at his wife for flirting with another man

Reggie Rockston says assumptions that he does not feel secure about his wife following a video of him confronting her about her interaction with another man are not true.

In the video shared to social media, the Hiplife legend angrily accused his wife of blatantly flirting with one of their foreign customers who had come to their restaurant to eat right in his presence.

Despite seeing Zilla’s wedding band, the man in question continued to flirt with her in Reggie’s presence which got him furious.

He defended his actions during an interview with Abeiku Santana on OkayFM.

“I go on my wife’s phone…nobody…transparency, we are over 20 deep so if I am insecure, it would be based…[pause]…I’m not even insecure, I’m a very secure man and a little bit of jealousy is also healthy so the kids will know you adore your wife,” he said.

Meanwhile, Reggie has asked some social media users blabbing about his jealousy to let him be because he had to witness a man flirt with his wife and it’s not something some men can stand.

“I was sitting there and they wrapped my girl in front of me. I held onto her and everyone was like you are jealous. Even your girl’s phone makes you cry. In my house, there is no code on my phone, my wife knows,” he added.

SOURCE:GHPAGE
Explains got.angry HE HER Reggie Rockstone WHY WIFE WITH 2022-03-12
Elvis Anokye
Share

Tags Explains got.angry HE HER Reggie Rockstone WHY WIFE WITH