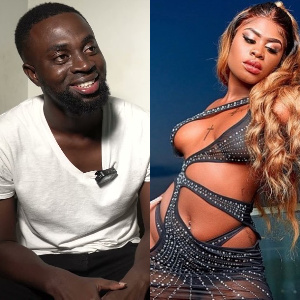 Yaa Jackson only listens to the brother

Kumasi-based music producer, Kojo Akonwaa popularly known as 925 Music has shared what it was like working with Yaa Jackson in an interview with Zionfelix.

He revealed Yaa Jackson was a difficult person to work with because she was easily swayed, especially by her brother negatively.

The producer disclosed the new talent never listened to anyone and did things according to her whims.

“When I was working with her, her brother wasn’t part of her business and when she is doing something whether good or bad she only needs one support. When she is warned to do things right or stop something she lays low, but when she gets one support to continue she sways in that angle.

“You may tell her to do something, and she would say ‘her brother says’ and that was the point I noticed she was screaming at people and telling others ‘ýou should be making more than you are making and all the sorts’, he shared.

In the period they worked together, he added he was very hurt with how Jackson. K Bentum, the father of the actress, was supportive of his daughter’s actions.

He said Yaa Jackson’s father assumed he was squandering the money generated from her daughter’s shows.

The former manager explained that Yaa Jackson was given 70 per cent of the money they made at shows and the highest pay they ever received was 12,000 cedis and the lowest being 1500 cedis.