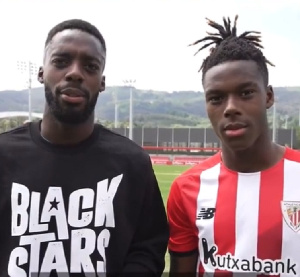 We are Black Stars – Inaki and Nico Williams declares

Ghana targets, Inaki Williams and Nico Williams have declared that they are Black Stars in a Spanish La Liga video.

The Williams brothers made the declaration in the aforementioned video as part of a campaign against racism and discrimination.

“We are Nico and Inaki, we are Black,” Inaki said in the video. “If you want to know more about us, watch black stars of La Liga,” Nico added.

The series aims to celebrate black footballers in the Spanish first tier.

Inaki and Nico Williams have been on the radar of the Ghana Football Association for a while.

The FA are reportedly in advance talks with the two to switch nationality and play for Black Stars.

While talks are believed to be in progress, Inaki and Nico have dropped hints of playing for the Black Stars after retweeting and liking a post by the official Black Stars handle on Twitter.

Their actions sparked rumors about them agreeing to represent Ghana and joining other Ghanaian players born abroad who switched nationality to Ghana.

The Williams brothers were born in Basque, Spain, to Ghanaian parents.

Inaki, who is the oldest, has been a long-term target for Ghana between the two. He has made one appearance for the Spanish National team, however, he is eligible to switch nationality.

Tags AND ARE BLACK DECLARES Inaki NICO STARS WE WILLIAMS