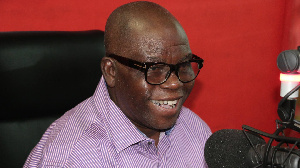 We are happy COKA lost, he’ll have given NDC hell – Alhaji Sani

A founding member of the opposition National Democratic Congress (NDC), Alhaji Sani Mohammed has expressed joy about the outcome of the just-ended executive elections in the Ashanti Region.

Speaking about the development in an interview on Akoma FM, Alhaji Sani Mohammed said that Wontumi’s win and Odeneho’s loss will play perfectly in the favour of the National Democratic Congress.

According to him, if the latter had won, the NDC would have had a lot more work to do to gain votes in the national elections in 2024.

“I am happy Wontumi has won because if his close contender Odeneho Kwaku Appiah (COKA) had won, he would have given NDC hell of a work in the upcoming general elections, so for me, I am happy the delegates have collected money and have voted for Wontumi,” he said on Monday, May 30, 2022.

Alhaji Mohammed further noted that by giving their votes to Chairman Wontumi whom he describes as a ‘volatile leader’, the NDC’s work in the region becomes less hectic.

“that the NDC had keen interest in the NPP elections in the Ashanti Region because here is where the NPP heart beats so if they have given the nod to a cheap and volatile leader who will make our work easier, then it’s a plus to us the NDC,” he is quoted to have said by 3news.

Previous Meet the 15 NPP Chairmen elected in the regions
Next I received GH¢100,000 of COVID-19 funds – NPP Sagnarigu PC claims in viral audio