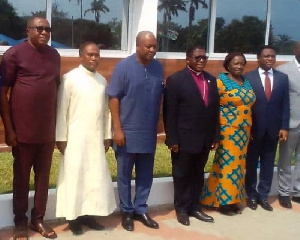 We met Ofori-Atta, Akufo-Addo and others before Mahama – Methodist Bishop confirms

Members of the clergy who recently visited former President John Dramani Mahama, had held similar talks with members of the Executive and Legislative arms of government.

According to Most Rev. Dr. Paul K. Boafo, the Presiding Bishop of Methodist Church of Ghana, who was leader of a delegation that met Mahama earlier this week, they had met among others, President Nana Addo Dankwa Akufo-Addo and Finance Minister Ken Ofori-Atta.

He also summarized the reason for their intervention as, taking proactive steps to forestall a recurrence of the violent scenes that were witnessed in Parliament during the post-2022 budget debate especially with the matter of the Electronic Transactions tax (E-Levy).

“We have come as heads of churches of the various associations and groupings in Ghana. Our history has it that the church has played a very significant role in our development and the welfare of our people.

“And so, the major stakeholders, when things come of concern, we are all to take it up and find answers and resolutions to it, so that at the end of the day what we preach and what governance is all about can be achieved to the glory of God, he added.

On the back of the chaos in Parliament, he added: “Christian bodies became alarmed and said will not sit but see how best we can together, find a solution to it. So we have made various approaches.”

1 – Minister of Finance – on two occasions

3 – Some members of the Minority

Why the meeting with Mahama

Rev. Boafo explained that after all those meetings: “We have seen that there are other major stakeholders we need to make approaches to and see how best we can find answers to what is happening to us, looking at all the circumstances and the conditions around us.

“It became very necessary during our series of interventions and interactions … it became necessary that we cannot leave His Excellency the Former President behind but to also make a move to see him.

“And see how best we can all have discussions and look at what is happening to us in our country and if there is a way out by which we can all look at it and come to a resolution,” he added.

Previous Cedi performance hits a snag, sells at GH¢7.09 as at February 17
Next Online businesses to be taxed from April 1