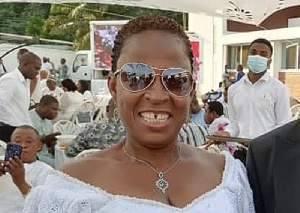 Chaos in Parliament over E-levy

Comfort Doyoe Cudjoe-Ghansah, the Member of Parliament of Ada Constituency, has promised of more violence in the house of Parliament if the Majority side of the house ‘does not change’.

According to her the Minority is primed for the chaos and that any attempt by the Majority to push through their interest will meet their resistance.

She is quoted by Adomonline to have said on their morning show on Wednesday, December 22, 2021 that Parliament will be converted into boxing ring whenever necessary.

She explained that it is not for nothing that both sides have twenty female MPs and that whenever battle is due, the women will slug it out.

“We will make Parliament a boxing ring. There will be more fights if Majority does not change its position on E-levy. The women are 20 for both sides so everyone has chosen her fighting partner,” she said in an interview on Adom FM.

“It is not for anything that both Majority and Minority have 137 members. Everyone has a fighting partner,” the Ada MP, who is also the Second Deputy Minority Chief Whip, noted.

Her comment comes in the wake of condemnation of parliament over the fracas the occurred on December 20, 2021.

Parliament has been criticized by the Peace Council and civil societies of courting the country shame with their intransigence.

Majority Leader, Osei Kyei-Mensah-Bonsu has apologised unreservedly to Ghanaians and assured that efforts will be made to nip it in the bud.

“As a leader of the house, I feel ashamed. I feel ashamed to be a leader of this house. Ultimately, I bear the responsibility. If a team loses a game, the coach takes the blame despite not being a member of the team. That is why I’m taking the blame despite not being the one who orchestrated the violence. We apologise to Ghanaians for our disgraceful conduct.

“We have disgraced the whole country. Until recently, Ghana’s Parliament used to be referenced as the ideal Parliament. We started with shame but some thought this it one-time event only for it to happen again. This is so embarrassing. It’s a very sad situation,” he said.

What happened in Parliament

On Monday night, the First Deputy Speaker decided to take leave of the Speaker’s chair for the Second Deputy Speaker to take charge allegedly to enable him to participate in voting, which occasioned disagreement from the Minority, and a subsequent tussle over the Speaker’s sitting area ensued.

Dozens of the opposition parliamentarians exchange fisticuffs with their colleagues on the Majority side while some officials of parliament tried to protect the Speaker’s seat and the mace of parliament from being attacked.

However, calm returned moments after, before the Second Deputy Speaker, Andrew Asiamah Amoako, adjourned the sitting.

Meanwhile, the House, without the Speaker, Alban Bagbin has adjourned sitting to take a break for Christmas and will resume sitting on January 18, 2022.