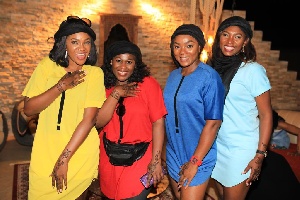 What Africa must do to improve on tourism – Dubai Girls

With architectural ambition, amongst others transformed to reality, Dubai keeps attracting attention and the Nollywood quartet believes Africa, known for its natural resources and culture, can excel in tourism if it takes a cue from the most populated city in the United Arab Emirates (UAE).

Known as ‘Dubai Girls’, the four actresses – Uche Jombo, Omoni Oboli, Chioma Akpotha and Ufuoma McDermott – have been at the forefront of promoting Dubai to the rest of the world. They told the media that Dubai has been able to entice visitors as a result of unparalleled leadership and maintenance culture.

“Anybody can come and build an all-shiny thing but to maintain it is the problem. And if you cannot maintain, you’re not ready for tourism,” said Uche Jombo as she responded to a question about what Africa needs to do if it wants to take tourism seriously.

Top on Omoni Oboli’s list was safety. She opined that the safety of people is crucial and paramount and hence, it is detrimental when compromised upon.

“Safety is number one,” she said in her opening remarks. “When we get the country actually safe and get the people to feel they’re safe because there can be safety but if you don’t feel safe, you don’t feel safe… When we have safety in any nation, then we can attract foreigners.”

She continued: “We already have beautiful places. To be honest, it doesn’t have to be all shiny; it could be cultural. We have so many natural resources, and beautiful places people can see. However, do they feel safe when they come to these countries?”

On her part, Chioma Akpotha said the success or otherwise of Africa’s tourism dream depends on leadership. According to her, there is a need for Africa to strengthen its institutions and allow the laws to work accordingly. Failure to do so, she stated, would be inimical to tourism on the continent.

“The first time I traveled out of Nigeria [to Dubai], I saw what I saw and I wanted it replicated in my home. And that’s what I think good leadership should do for Africa,” Chioma said.

“We want the good things of life, we want all the arms of government function… I want to see someone being attended to immediate when involved in an accident. It’s good leadership; if we’re able to replicate that, then we start to head towards making tourism big,” she added as Jombo gave her final bite.

“The government should just do what they normally do. Copy and paste.”

“[It] will be the largest and most successful modern-day tourism project in the MENA region, doubling annual tourism visitations to Dubai based on its global appeal, brand awareness and unique multiple integrated offerings,” Arabian Business quotes co-founders Sandra G. Matthews and Michael R. Henderson to have said in a press release.

Source: www.ghanaweb.com
africa DO DUBAI GIRLS improve MUST on to tourism WHAT 2022-09-11
admin
Share

Tags africa DO DUBAI GIRLS improve MUST on to tourism WHAT