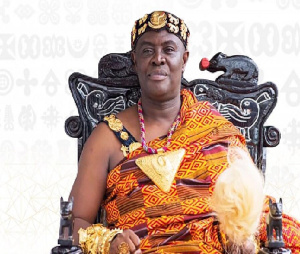 The Dormaahene and President of the Bono Regional House of Chiefs, Osagyefo Oseadeyo Agyeman Badu, has described the uncompleted at Sunyani and other parts of the region as discriminatory against the people of Bono.

He has therefore asked the government to make it a priority to complete the projects.

He said this at a meeting with Chiefs in Bono at Sunyani.

The traditional ruler observed that almost every year, roads and other infrastructural projects that are captured in the national budget for construction in most of the key towns in the region are either ignored or shoddily executed.

But the story is not the same in other regions where markets and other projects are well constructed, he noted.

He also decried the slow pace of rehabilitation work been done to revive the Sunyani Airport which is out of use more than five years.

He gave the assurance that the traditional authority is ready to provide land for the resettlement of people who have encroached on the airport land.

“What crime have the people of Bono committed to be treated this way. Look at the rate of development in other regions as compared to what is transpiring in Bono.

“Kumasi and Ho Airports have been refurbished or constricted yet the one in Sunyani hasn’t seen any facelift. As a matter of urgency we are demanding from the government to be up and doing and reconstruct the airport,” he said.

Source: 3news.com
Related Topics:DORMAAHENE
Up Next

Tension in Nyinawusu after the death of five illegal miners