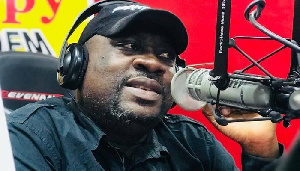 Barely a day after Happy FM announced the death of one of its top presenters, Doctar Cann, mother-in-law of the deceased, Mrs. Aboagye has disclosed what Cann told her minutes before he passed away.

Doctar Cann passed away at a private hospital in Accra on Friday, March 25, 2022, after a short illness, his management wrote in a statement.

“It is with a heavy heart that Management of Global Media Alliance Group announces that we have lost one of the members of the GMABC family, Francis Cann, popularly known in the Showbiz Industry as Doctar Cann, who passed away on Friday 25th March, after a short illness,” they posted on Facebook.

Speaking in an interview with Peace FM’s Entertainment Review show Saturday, Mrs. Aboagye disclosed that her son-in-law arrived home from work late at night on Wednesday, March 23, 2022. She said Cann, after interacting briefly with her, walked straight to his room.

She, however, disclosed that Cann who was looking hearty in the night suddenly woke up the next morning [Thursday] and he could barely speak out clearly.

“I noticed the way he talks has changed, the words were not coming out clear, so I asked that they quickly rush him to the hospital. Upon reaching the facility, they examined him and said he was okay but they said they will keep him and discharge him the next day [Friday],” she told host Kwesi Aboagye as monitored by Ghanaguardian.com.

She said on Friday, while she and Cann’s mother stood by him at the hospital, he told her [Mrs. Aboagye] that “Auntie, bibiara nye dzen mma Awurade”, which literally means ‘nothing is too hard for the Lord’.

“Minutes after Ebo had authored those remarks, he passed on,” she revealed and started weeping on the phone.

Asked whether they know the cause of his death has been revealed, she replied, “the doctor had asked that run a test but the report would have been ready on Monday and he passed away.”

He was born to Mr. Francis Sylvester Cann and Mrs. Gloria Ofosua.

Doctar Cann hails from Saltpond in the Central Region and was married to Mrs. Dorcas Cann, whom he has four children with – three boys and an 8-month old baby girl.

Tags Cann Doctar HIS IN law mother told WHAT