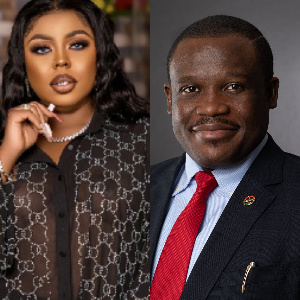 Social media has been inundated with reactions to Afia Schwarzenegger’s Instagram post which described an unidentified woman as ‘barren’. The space got more heated after the comedienne launched scathing attacks on Sam George over reports that the legislator had scolded her for making repugnant remarks.

The Ningo-Prampram MP had in a Facebook post questioned the veracity of a claim with an indication that the fact available to him says otherwise.

“But is she really barren? Is that a factual statement? Not as far as I know. Utterly distasteful commentary. Ah well, off to eat my chicken biryani with roti bread,” Sam George’s post sighted by GhanaWeb read.

Responding to Sam George’s post, Afia cautioned the legislator to stay off her way.

“Someone should warn and the word is warn Sam whatever George… As for me, I will assist you to trend…I am warning you. If you don’t want a peaceful June try me! Social Media MP, what’s your business in women’s fight?? Did you tell your wife before jumping in this gutter? It’s about to be a swimming competition in the gutters… TRY ME!!!” she fumed.

Sam George’s statement shared on Monday, May 30, 2022, was on the back of Afia Schwarzenegger’s attack on her fellow woman. While refraining from making the identity of her target known, the comedienne unleashed a barrage of insults on Instagram as she labelled her target barren.

“The next time you want to run your mouth, look for your mates aka your fellow barrens… Mothers are very busy people. When you meet responsible Mothers like me, ask how much a Montessori fees cost and see how useless you are as a woman to the society…” parts of the controversial showbiz personality’s post read.

“If you don’t want to hear certain things, don’t go looking for a mad woman’s trouble, I won’t call you Mother of twins if you are a barren… Period!” Afia Schwarzenegger added.

While the mystery surrounding the genesis of Afia Schwarzenegger’s post and who the said woman is yet to be unravelled, the comedienne continues to be criticized by persons who hold the view that her post was uncalled for.

She, however, appears unperturbed as she has made another post slamming her target.